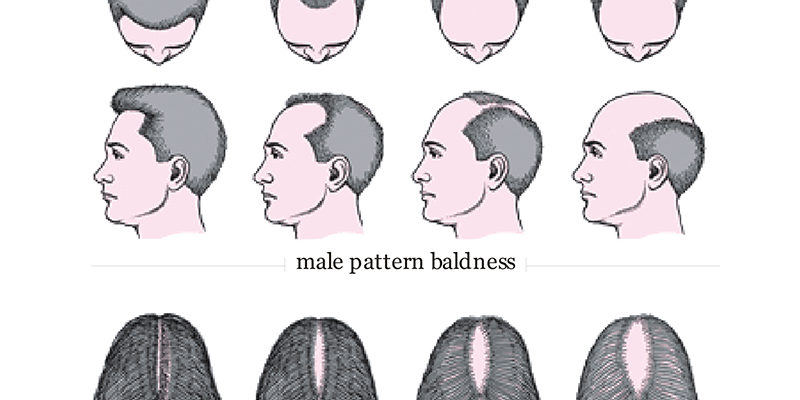 If you have the suspicion that you are going bald, you probably want to know just what exactly is “happening under the hood.” Unfortunately, there is a sea of rumors that attempt to get to the “root” of the problem.

After all, the great Hippocrates, father of modern medicine, thought that baldness could be cured by a mixture containing horseradish and pigeon droppings. The desire to have a simple solution within our control is understandable. But let’s debunk the top 10 hair loss myths and learn what the facts really are.

Men who are bald have high levels of testosterone

Fact: This myth falls into the same category as the “size of a man’s hands or feet…” Hair loss is caused by a greater sensitivity of hair follicles in some parts of the scalp to DHT (dihydrotestosterone), rather than to increased levels of testosterone per se. DHT causes genetically-susceptible hair follicles to shrink (miniaturize) and eventually disappear. If elevated levels of testosterone were the problem, then “all” of ones body hair should be expected to fall out as well.

Fact: In contrast to popular belief, going bald is not due to massive amounts of hair falling out, but rather by hair of normal thickness gradually being replaced by finer, thinner hairs -– a process called “miniaturization.” If large patches of hair start suddenly falling out, it is time to see your doctor.

Hair loss is caused by decreased blood flow to the scalp

Fact: People who accuse their hats as being the cause of their hair loss think that wearing hats all the time prevents the scalp from breathing. Actually, hair follicles get oxygen from the blood stream, rather than from the air.

Fact: Clogged pores are actually a cause of acne, not of baldness. If common baldness were simply due to clogged pores, then rigorous shampooing would be all that was needed to maintain a full head of hair. This is obviously not the case.

Fact: When people start to thin they sometimes think that shampooing is the cause, since they notice hair in the tub. To prevent this, they begin to shampoo less often. The hair that would normally come out in the shower now builds up on the scalp. With the next shampoo, even more ends up in the tub only confirming the patient’s suspicion. Remember, hereditary baldness is not due to hair falling out, but rather by normal hair gradually being replaced by finer, thinner hairs. The simple solution is to shampoo every day and the excess hair in the tub will go away.

Fact: Balding is often thought of as a “man’s” problem, but the fact is that over 40% of women suffer from significant thinning throughout their lifetime.

Hair loss medications only work in the crown

Fact: The main benefit of Rogaine (minoxidil) and especially Propecia (finasteride) is to slow down or halt hair loss, rather than to re-grow hair. Although initial studies showing the effectiveness of both Rogaine and Propecia were done on the crown, this does not mean that the medications won’t work on other parts of the scalp as well. In fact, the medicines can work wherever there is thinning –- as long as the area is not completely bald.

Hair loss stops when you get older

Fact: Once hair loss begins, it tends to progress over a person’s lifetime and never completely stops. However, the rate at which hair will continue to fall out is hard to guess. It is worth mentioning here that the younger you are when you start to lose your hair, the more likely you are to become very bald.

Source of article: http://www.bernsteinmedical.com/hair-loss/faq-myths-more/hair-loss-myths/
Order your New & Improved Hair Loss Serum before the end of July – Buy 1 Get 1 FREE
Follow The Image Link For Orders And More Information On This Product

Latest On The Blog
Archives
Go to Top